Kansas City, Missouri and Kansas City, Kansas is commonly referred to as. . . "The City Of Fountains" 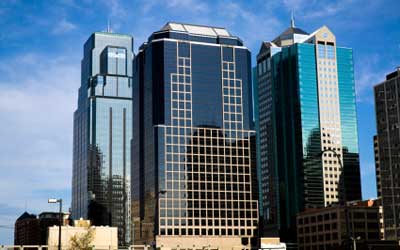 The Founding of Kansas City

The Missouria Tribe of Native Americans were the original inhabitants of the Kansas City area. The first European visitor to the region was the French man Étienne de Veniard, Sieur de Bourgmont. He was on the run from the French government for deserting his post as commander of Fort Detroit, and eventually settled down at the future location of Kansas City. In order to clear his name, he provided the French with writings describing the lands he had traveled through and the Native Americans who lived in his vicinity. He described the junction of the Kansas and Missouri rivers, and named them as such. He wrote these documents in 1713 and 1714. The French used his descriptions to create maps, and subsequently rewarded Bourgmont with highest honors. He was named as commander of the Missouri area.

After the Louisiana Purchase, Lewis & Clark camped at the future site of Kansas City in 1804 (history buffs will want to visit Kaw Point Riverfront Park). Soon thereafter, the Louisiana Territory was divided up, resulting in the creation of the Missouri Territory in 1812. As this region was gradually settled, Missouri became a state in 1821 and future Kansas City was established as the “Town of Kansas” in 1838. This name was changed to “City of Kansas” when it was officially incorporated in 1853. The city became a hotbed of violence during the Civil War due to the deep divide among the local population over the issue of slavery.

When the Missouri Pacific railroad was constructed through town in 1865, the city was still roughly the same size as Leavenworth in Kansas and Independence in Missouri. That all changed when Kansas City was made the home of the Hannibal and St. Joseph Railroad bridge in 1869. After the bridge opened, the city's population quadrupled during the next 50 years. In 1889, the City of Kansas adopted a new charter, changing its name to “Kansas City” at last. The railroad and rivers continued to play a hand in the expansion of the city. West Bottoms had been used to outfit Oregon and Santa Fe Trail travelers, and became home to the second busiest train center and also the second largest Stockyards, giving rise to the nickname “Cow Town”. The stockyards were destroyed by flood in 1951, but the legacy of Kansas City Strip Steak lives on. The area has undergone a recent revitalization effort, and The West Bottoms are a popular destination for entertainment in Kansas City. You can even visit the old Kansas City Livestock Exchange Building, now home to a variety of offices and one of the city’s best steakhouses, The Golden Ox.

Depending on the criteria, Kansas City could be classified as a humid continental climate. Average high temperatures in Kansas City climb to 90 degrees Fahrenheit in July, and average low temperatures get down to 20 degrees in January. Monthly precipitation averages 2.85 inches. The annual snowfall average is 19.7 inches.

Kansas City boasts 33 public schools and more than 20 private schools to choose from. Many institutions of higher education serve the Kansas City area, including the University of Missouri - Kansas City, Metropolitan Community College, Rockhurst University, Avila College, Vatterott College, National American University and St. Luke's College. In addition, you can reach the city of Lawrence, Kansas, in about 30 minutes, which is the home of the University of Kansas.

There are 12 hospitals in Kansas City, four of which have specialized focuses.

You'll find all of the entertainment, shopping and dining you would expect from a major metropolitan area here. From big movie theaters, live plays and comedy clubs to indoor and outdoor malls as well as both local and chain restaurants, Kansas City has it all.

If you're seeking some thrills, head over to Worlds of Fun, an amusement park with some of the tallest and fastest roller coasters in the region. Prefer to experience something wetter and wilder? Then Oceans of Fun, Worlds of Fun's adjacent water park, is the perfect place for you. The city is also home to numerous parks, including Swope Park, where you’ll find the world famous Kansas City Zoo.

As an interesting point of information, Kansas City contains more than 200 fountains which makes it the city with the second-highest number of fountains in the world, behind Rome, Italy. 18th and Vine is Kansas Citys’ home for the world's finest BBQ and blues music. Several clubs along the corridor offer live music nightly. Visit the American Jazz Museum and the Negro Leagues Baseball Museum while you’re in the area.

Kansas City is known far and wide for its distinctive barbecue cuisine. Traditional KC barbecue involves slow-smoked meat covered with a sauce based mostly in tomato with some molasses. Among the many popular local barbecue restaurants you can sample in Kansas City are the classics: Gates & Sons, Joe's Kansas City Bar-B-Que, Fiorella's Jack Stack Barbecue, and Arthur Bryant's; along with newcomers to the KC BBQ scene such as Q39 and LC’s Bar-B-Q. 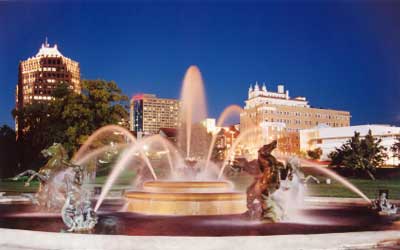 Home of The Chiefs, Royals, and more

Professional sports enthusiasts will want to head over to Kauffman Stadium to catch the Kansas City Royals in action, and its adjoining neighbor, Arrowhead Stadium, where the Kansas City Chiefs play. In Kansas City, Kansas, soccer fans will enjoy Sporting KC at Children’s Mercy Park, and Kansas Speedway hosts NASCAR events every year. If hockey is your sport, Kansas City has that in the form of the minor league Kansas City Mavericks at the Silverstein Eye Center Arena in Independence, MO.

Looking for entertainment in Kansas City? The Sprint Center, Hy-Vee Arena, and Power and Light District have concerts and events year round. Crown Center downtown is home to Legoland and SeaLife, along with many other shops and restaurants just around the corner from the famed Union Station and the National WWI Museum and Memorial. The Country Club Plaza (The Plaza to locals) is 15 blocks of spanish-inspired architecture along Brush Creek and home to more than 100 stores and 30 restaurants. The areas surrounding downtown Kansas City each have their own unique attributes, rooted in the history of the city itself. Westport, West Bottoms, and the River Market are must-visit destinations for shoppers and history buffs alike. On the north side of town, Zona Rosa is just a short drive from the Kansas City International Airport. To the east, visit Independence Center. And west, across the border in Kansas, The Legends Outlets, Town Center Plaza, and the Oak Park Mall are a shopper’s dream. There are options from thrift and resale stores to high end designer fashions too numerous to mention! Kansas City has it all!

It's difficult to stop talking about everything that the Kansas City area has to offer. If you're ready to experience a beautiful city with a diverse array of amenities, contact us today. We'll be happy to tell you more about our area and find you the perfect property for your needs.